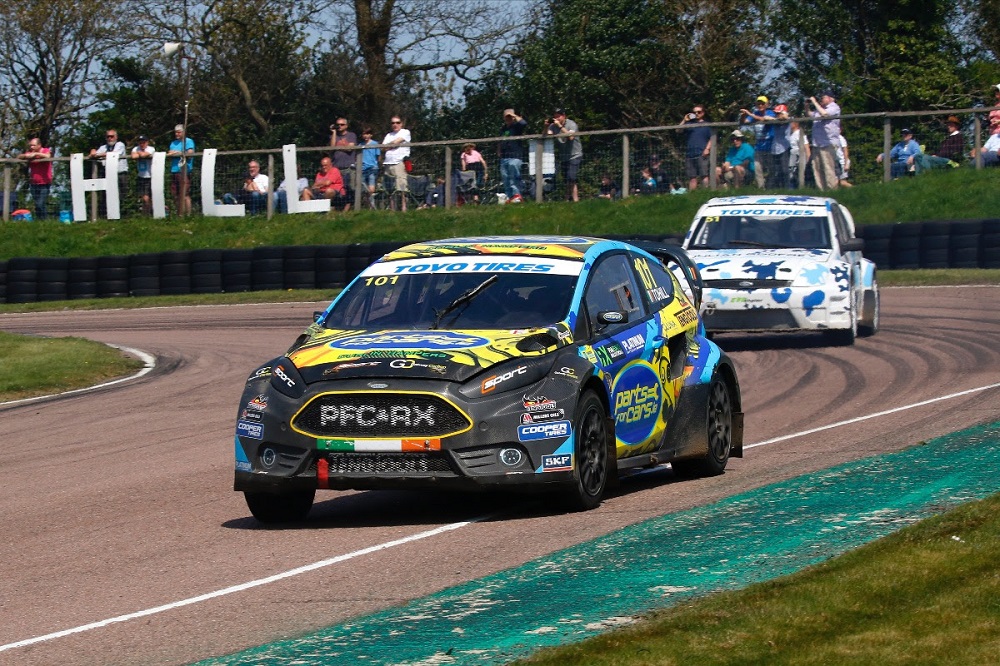 A two-time European Champion, Tohill battled with and passed former British Champion Ollie O’Donovan (Iver) for the win. It was O’Donovan who headed the Intermediate Classification at Lydden, fastest in the first two qualifiers before Tohill set the best time in Q3. Tohill lined up second on the grid for the final, as round one winner Julian Godfrey (Heathfield) completed the front row on the outside.

At the start, Godfrey immediately took his joker lap, as O’Donovan and Tohill battled for position into the first corner, Chesson’s Drift. O’Donovan took the lead and headed the field until he took his joker on the fourth lap, when he was passed by Tohill, who had elected to take his joker one lap earlier and under-cut the 2007 British RX Champion for the lead.

Godfrey had climbed up to third and challenged the leading duo until the final lap, when he was slowed by a technical issue.

“It’s amazing to win here, it was a great job by everyone in the team all day. We worked hard for this, but it feels like we really earned it,” said Tohill, who’s win came in front of a packed crowd in blazing sunshine at the Kent circuit. “It was a hustle out there with Ollie, I got him off the line then he sank himself down the inside into the first corner, which drifted me out wide. Then I had to keep the pressure on and try to pass him, or force him into an early joker. I had one lap to do it after I took the joker and I put in a real good lap so it was just enough. It was a brilliant end to the day to get the win. I kind of felt it was in me today, the car was running well, it’s well suited to this circuit and it’s fantastic to take the lead of the Championship.”

Jake Harris (Canewdon) produced a solid performance in his first start of the season to be consistently inside the top four through qualifying and run third in the opening laps of the final. He followed O’Donovan through the joker lap section on lap four and finished the race fourth, ahead of fellow Citroen Supercar racer Pat Doran (Dolton) in fifth. Andy Grant (Barnstaple) also made his first start of the campaign and was sixth.

Subaru Impreza driving Welshmen Liam Manning (Carmarthen) and Nigel Burke (Carmarthen) completed the list of final finishers in seventh and eighth, but compatriot Mike Manning (Carmarthen) was hampered through the day with transmission problems. Steve Hill (Thame) and Steve Mundy (Ludlow) both retired from the event after Q1 with technical issues.

Tristan Ovenden (Canterbury) dominated proceedings at his home circuit to claim victory in the Motorsport UK Supernational Rallycross Championship and extend his points lead. Fastest through qualifying, Ovenden made the best start in the final with his Renault Clio V6 and led Paige Bellerby (Northallerton) throughout the race to take his second win of the year. Bellerby’s second place finish lifted her to second in the points, while Super1600 Rallycross Championship runner Darren Scott (Sittingbourne) took his joker lap early in the race and charged back through the field to complete the podium.

“I do try really hard here at Lydden Hill and it’s worked out today. I thought we’d be up against it a bit more, Peter McGarry set some good lap times but he didn’t have much luck. I’m so pleased to win our home event,” said Ovenden. “The feeling of winning doesn’t wear off at all, we had a lot of people here, we put a lot into it and it’s really amazing to win to win at our home circuit.”

Round one podium finisher Roberts Vitols (Latvia) returned to the first UK circuit at which he has prior experience in round two and dominated qualifying in the Motorsport UK Junior Rallycross Championship, before taking the lead of the final from pole position. But, his Suzuki Swift ran into technical troubles on the fourth lap, handing the advantage to points leader Luke Constantine (Richmond).

In a repeat of the Silverstone season-opener, Constantine and Patrick O’Donovan (Iver) fought for victory on the final lap, Constantine coming out on top. His cousin, James Constantine (Darlington) used an early joker lap to climb back up the order and finish third.

“It was a tough day for us, Roberts was really fast. He definitely deserved to win – he was doing stunning lap times but with a car problem in the final we just managed to pip him to the finish,” said Constantine. “I got my head down at the start of the race and stuck to the game plan of keeping pressure on him and not let him get too much clean air. When I saw him pulled over at the side I did lose my focus a little but I managed to hang on. It’s a long run this year and it’s great to get another good result.”

Ben Sayer (Northallerton) fought back from a DNF in Q1 to finish fourth, ahead of 2019 newcomer Tom Ovenden (Canterbury) in fifth as Vitols recovered to finish sixth.

Former Junior RX racer Will Layton (Banbury) set a pair of fastest times in qualifying and won his semi-final to start on pole position for the Swift Sport Rallycross Championship final, but it was Championship leader Dominic Flitney (St Ives) who jumped into the lead at the start of the race and remained in front to score his second successive victory. Layton came home second while series newcomer James Chisman (Sheerness) fended off the close attentions of Max Weatherley (Faversham) in the closing stages of the final to finish on the podium.

It was heartbreak for Drew Bellerby (Northallerton) in the BMW Mini Rallycross Championship final, having set a brace of fastest times in qualifying and won her semi-final to earn pole position for the final. Round one winner David Bell (Ferryhill) made the best start and led the race, but Bellerby re-passed Bell for the lead using the joker lap and was on course for victory, until the right rear suspension on her car collapsed with a lap to run. Reigning Champion Bell took the win, ahead of former Junior RX Champion Bradley Durdin (Nazing) and Martin Hawkes (Stockton-on-Tees).