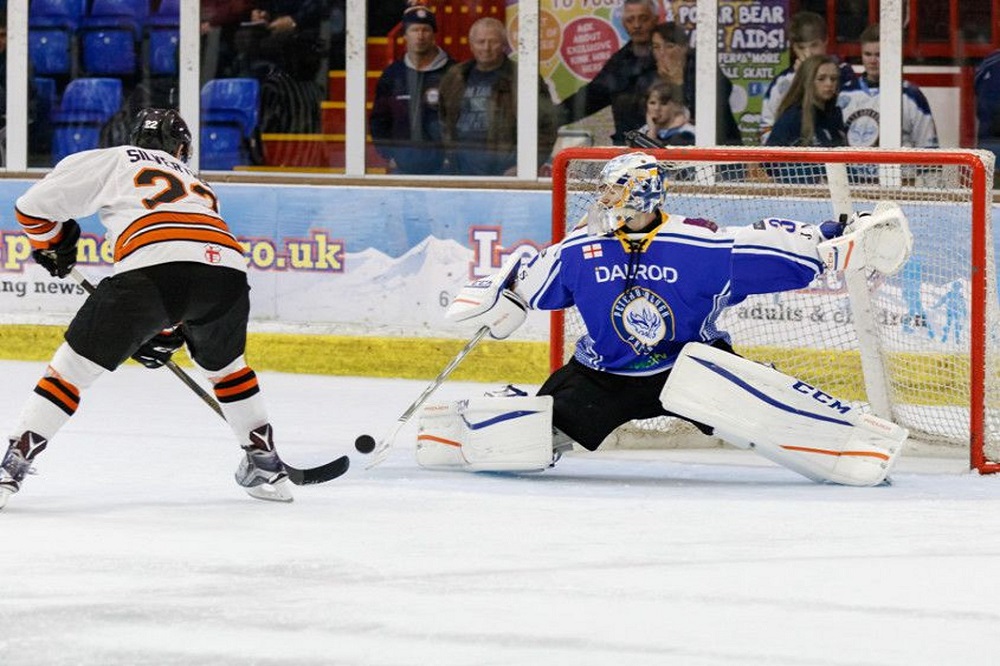 25 year old netminder Adam Long will make up the 2nd half of the Flames goaltending tandem for the coming season. In 2018-2019 while with NIHL 1 Invicta Dynamos, the 6’1”, 165lb stopper got the call up and made his Elite League debut with Manchester Storm where he remained for the 2019-2020 term when he got into a pair of games and posted a 1.30 goals against average and a 94.7 save percentage. This past season, Long remained active during the pandemic slowdown by taking part in the NIHL streaming series where he spent 12 games with Haringey Huskies.

“I’m really excited to be joining Guildford for the upcoming season,” said Long. “Ever since I faced Guildford in the EPL they always proved to be a very professional organisation. After speaking to Paul and Ex players of the flames it was a no brainer once the offer came about. I can’t wait to get everything rolling and meeting everyone in September.”

Long made his senior start with Chelmsford Chieftains and Chelmsford Warriors in 2012-2013. He spent the bulk of the next two seasons with Warriors, posting a 3.46 goals against average and a better than 90 save rate in 13-14 and improving his lot to 2.58 and 91.7 by the same measures the year after that. Between 2015 and 2017 he made his first step up to Premier League Peterborough Phantoms where 27 games in 2016-2017 resulted in a 3.78 goals against average and an 89.2 save percentage. The following season he split his time nearly halfway between Phantoms and Hull Pirates before the move to Invicta and the lead up to his top-level start with Storm.

The native of Crewe also has a couple of GB appearances on his resume as the starter for his country at the World University games during the 16-17 and 18-19 terms.

“Wee had Adam pegged to be with us for what would have been the 20-21 season, but obviously the unique situation ruled all of us out for the season,” explained Head Coach Paul Dixon.

“This is one of the toughest jobs in all of sports, coming into a spot where you know you are not going to play as much as the other guy you are working with. You need a guy who can come in and practice hard everyday and do most of his competing in practice which is not an easy head state to maintain day in and day out.”

“On top of that mental challenge you are asking a guy to also always be ready to play knowing that the notice for that may be a short as a matter of seconds.”

“Adam’s attitude really seems to match what is needed to achieve above, and when has been put in his spots in this league he has performed well so we are really happy to get him on our side. He was really excited to be talking about being with us, and we are very much looking forward to seeing him down here when we get started.”