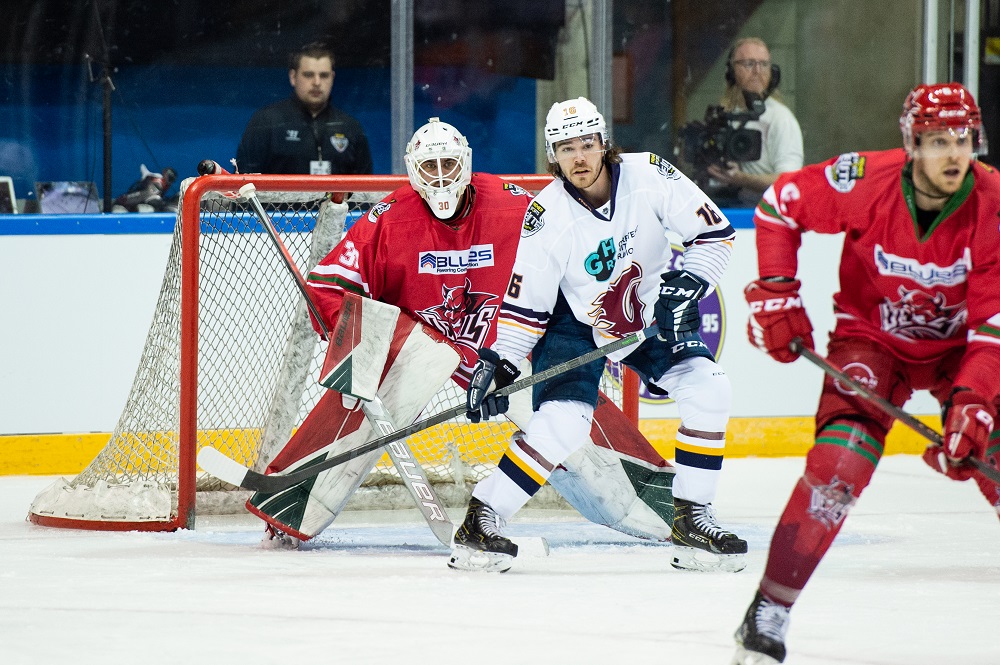 Heartbreak for Flames in Semi-finals

A pair of 3rd period Turner Ripplinger goals pulled Flames out of a 2-goal hole, and Flames held a shot advantage in every period, finishing with a 32-30 edge, but a late Cardiff Devils Justin Crandall powerplay strike just over 2 minutes out lifted them to a 3-2 semi-final win.

Devils had the only goal of the opening frame when they got things started at 12:45 through Jake Coughler while Flames powerplays both before and after that goal were unable to put one on the Flames side of the ledger.

In the middle frame, Flames had to kill their first penalty of the evening and were able to keep the score to the slim one goal difference as the clubs skated into the final half of the contest. Inside the last 30 seconds of the set, however, Cardiff dealt a blow to Flames hopes when Cole Sanford beat Kevin Lindskoug and doubled his side’s lead.

Early in the 3rd, Flames got the start they would have wanted when Ripplinger cut into the deficit with more than 18 minutes still to play. Just inside the last 5 minutes, another Ripplinger strike pulled Flames back even, but a late Flames penalty proved costly as Devils secured the win with the 58th minute Crandall marker. Flames played with an extra pair of skaters in the last minute during a powerplay of their own and Lindskoug on the bench but nothing more than close calls the rest of the way and the Devils move on to the championship final against Belfast Giants while Flames are relegated to the 3rd-4th place game against Dundee Stars.

“It’s difficult to express how disappointing it is to have played as well as we felt we did and come away being relegated out of the championship game,” said Paul Dixon.

“We couldn’t have asked for more from these guys today, and at this stage it’s hard to not feel a bit heartbroken for all of them. Not only how we played, but the no quit attitude that gave us a chance to be back in it when we had been a couple of goals down.”

“These guys put everything they had into the game, and it’s not easy to accept that we did not win it when we felt like today we had the bulk of the pressure and chances.”

“That’s part of the excitement of the one-off semi final format I guess. There is no question it hurts, and we deserved a better fate today, but eventually we can look back on our playoffs, including this game, and know that we played well, and we left it all on the ice with our collective effort.”