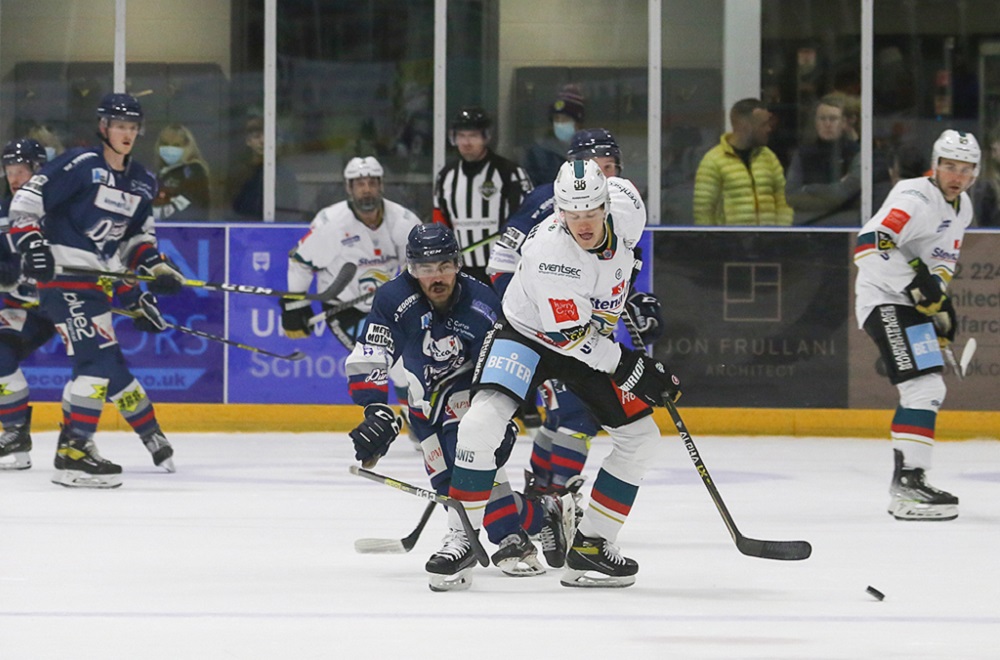 The Belfast Giants emerged victorious from a chaotic encounter with a short-benched Dundee Stars in Scotland on Sunday evening, netting four times through JJ Piccinich, Ciaran Long and a late Cam Knight double.

Coming into the game missing five key players, Omar Pacha’s Stars side would go on to lose two more bodies to injury, and a further one to a game penalty, before the final buzzer.

FIRST PERIOD
The Belfast Giants’ hopes of pouncing early on a short-benched Dundee Stars was scuppered by a Too Many Men call at 04:48 (served by Tyler Soy).

A forced turnover from Jordan Boucher in the Giants’ defensive zone proved the biggest chance of the period on the 10-minute mark, but the Giants’ 3 on 1 rush was broken up by a sharp Adam Morrison in the Stars goal.

SECOND PERIOD
A quiet game burst into life in the middle period. A Drydn Down interference penalty at 21:47 opened the door for JJ Piccinich to edge Belfast into the lead on the power play at 23:33 (Assist: Mark Cooper) (0-1).

Ciaran Long doubled the Giants’ tally at 27:38, capitalising on a David Goodwin shot, which Adam Morrison rebounded into open ice (0-2).

Dundee’s injury woes were compounded mid period, as Kris Inglis was stretchered from the ice with a leg injury, receiving a standing ovation from both sets of fans.

Goodwin took a high sticking penalty at 35:00, and the hosts pulled a goal back at 36:50 with Belfast’s Sam Ruopp (roughing, 35:58) and Dundee’s Charlie Combs (slashing 35:58) alongside the Giants Captain in the box.

The Giants saw a penalty shot come and go at 36:31 when Gabriel Desjardin slashed a goal bound Ben Lake. Lake skated the slot and pulled the puck left, but Adam Morrison’s save saw off the danger.

Mayhem erupted in the closing stages of the period, when Kyle Haas (who had just served a roughing penalty at 37:33) emerged from the box and finished a huge hit on Jordan Boucher at the Stars’ blue line; prompting Darcy Murphy to tangle with Haas in defence of his teammate.

The referees assessed Haas a 5 for fighting and a 5 + game for charging, as the Stars’ defenceman headed for an early shower. Murphy, meanwhile, took a rare 5-minute fighting major as the period drew to a close.

THIRD PERIOD
The tone of the game was set in a lively conclusion to the middle period, with the final 20 minutes peppered with penalties.

Charlie Combs and Ben Lake sat for roughing at 42:50, leaving the sides at 4 on 4 for a third time.

The Stars weren’t so fortunate at 5 on 3, after Michael Poirier sat for high sticking at 51:49 and Markus Kankaanpera followed for roughing at 52:45.

The Giants moved well in the zone, eventually finding Cam Knight who buried number three and gave the visitors room to breathe at 53:46 (Assist: Scott Conway) (1-3).

Knight continued a showpiece period when he notched his second shorthanded (Lake, high sticking, 54:05) and put the game out of Dundee’s reach at 54:30 (Assist: JJ Piccinich) (1-4).

There was just enough time for a Scott Conway roughing penalty at 59:23, perhaps the fitting end to a gritty, physical encounter on the road.