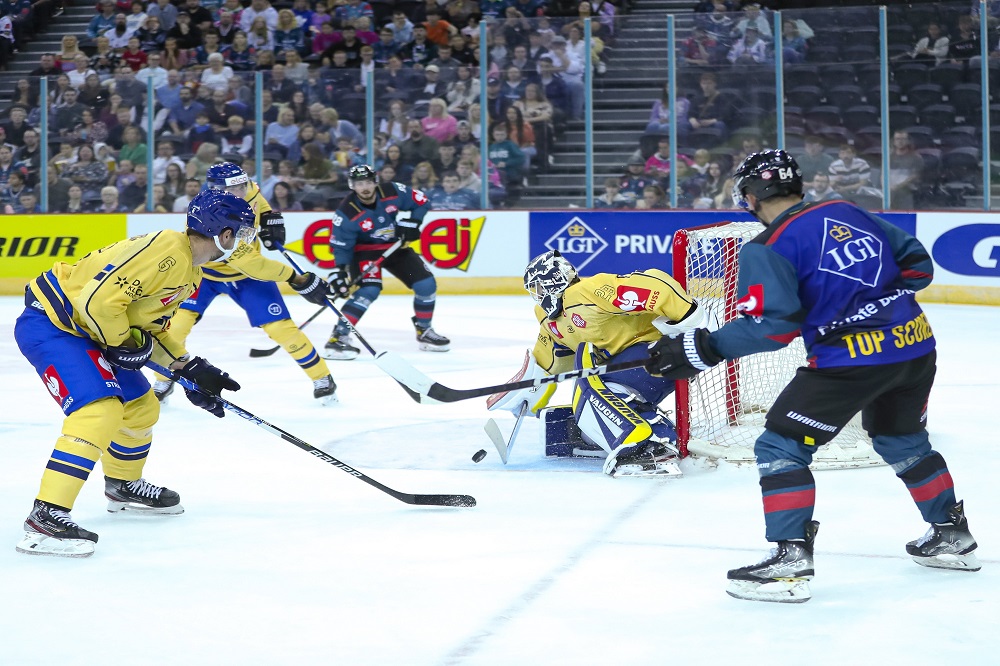 Giants go down to Davos

The Stena Line Belfast Giants once again gave a strong showing of themselves in Champions Hockey League action at The SSE Arena, Belfast on Sunday afternoon, before second period penalty troubles left the door open for Swiss champions HC Davos to capitalise.

Belfast tied the game from behind twice - first from 0-2 down, and then at 2-3 with goals from David Gilbert, Ben Lake, and Scott Conway.

The atmosphere in The SSE Arena, Belfast at face off was electric, as a small but vocal band of travelling Davos fans met the equally lively Teal Army.

On the ice, it was much the same. The Giants came out of the gates at pace, matching the fast-skating Swiss Champions for the opening five.

Davos were the first to strike at when defenceman Michael Fora found a squared pass at the edge of the crease at 6:53. (0-1)

Belfast continued their fine form on the penalty kill at 9:25 when Chad Butcher sat for slashing- and continued to press Davos on their opening power play when Raphael Prassl sat for a slashing call of his own at 11:57.

Magnus Nygren doubled the visitors’ lead with a one timer from the right circle at 15:14, but the roof almost lifted off the SSE when Mark Cooper found David Gilbert who roofed the puck past Davos goalie Sandro Aeschlimann just 30 seconds later. (0-2, 1-2)

Ben Lake tied the encounter with a smart faceoff play from Ciaran Long at 21:10, before Davos edged the lead again on the power play as Matej Stransky fired home at 22:48 with Chad Butcher in the box for hooking. (2-2, 2-3)

As a scintillating encounter continued, the Giants countered again as Scott Conway’s snipe from the high slot sent the Teal Army back to their feet at 23:19. (3-3)

Tempers began to flare on-ice as Davos found themselves in a battle they perhaps did not anticipate. The sides exchanged penalties and scuffles after the whistle before Scott Conway’s cross check in the crease opened the door for the visitors to retake the lead at 32:01 courtesy of Stransky once again. (3-4)

Davos found another at 34:22 with Steve Owre in the box for hooking. Valentin Nussbaumer’s marker was the Swiss Champions’ third consecutive power play goal of the period. (3-5)

The Giants survived a Colby McAuley penalty for checking to the head at 42:31 but saw back-to-back power plays go begging when Julian Schmulz (tripping) and Raphael Prassl (interference) followed in quick succession.

Next to the box for Belfast was David Goodwin, called to serve a Peyton Jones tripping penalty at 49:45 before yet another power play for the home side as Axel Simic sat for tripping at 52:58.

Leon Bristedt poured cold water over the Teal Army’s hopes of a comeback, firing over Peyton Jones shoulder for the visitors’ 6th at 55:19 before the Giants weathered back-to-back penalty kills (Cullen, delay of game and Foley, tripping) to end the game.