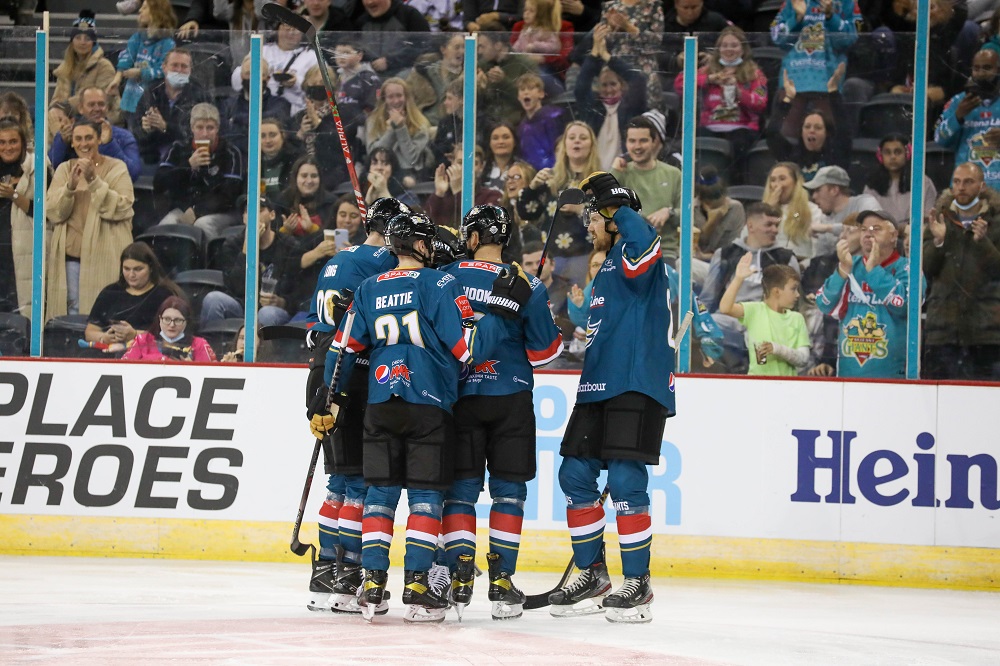 A double from Scott Conway, plus goals from Griffin Reinhart, Ciaran Long, Jordan Boucher and JJ Piccinich saw the Belfast Giants book their place in the Quarter Finals of the Challenge Cup on Sunday night, completing a four-point weekend over the Fife Flyers in front of a packed SSE Arena.

Homegrown teenage prospects Mack Stewart and Kell Beattie were also given their home debuts by Adam Keefe and did not look out of place on a night where the Giants dominated all facets of the game.

Former Giant Shane Owen was tested early in the Fife crease by a spritely Belfast start. He flashed the glove confidently twice in the opening 5 minutes, as the home side piled on pressure.

A Mack Stewart bodycheck deep in the Flyers zone brought the large SSE crowd to life, as chants of ‘Stewy’ echoed around the bowl. The home debuts of Stewart and Kell Beattie had been the dominant talking point around the arena ahead of faceoff.

You can imagine, then, the roar when Beattie snapped a shot from the right of the zone. The puck, agonisingly, fizzed just wide.

Scott Conway opened the home side’s account at 12:54, tipping home a Jordan Boucher effort from the top of the right circle. (1-0)

Belfast’s lead was doubled in spectacular fashion at 19:59 as Griffin Reinhart netted a shorthanded buzzer-beater on the breakaway, as Slater Doggett sat for cross checking. (Assist: Mark Cooper, 2-0)

As Doggett emerged from the box and the sides returned to full strength, Jacob Benson redirected Matthew Carter’s pass in the Giants slot, beating Jackson Whistle who had seen very little of the puck in the first period. (20:45, 2-1)

The visitors’ hope was short lived however, as Belfast struck twice in quick succession.

Ciaran Long danced his way inside from the right circle at 25:09, finishing a sprawling solo effort in style to restore the two-goal cushion. (3-1)

Then, at 26:27, capitalising on consistent zone time from the Giants, Jordan Boucher made it 4 from close range. (Assist: Scott Conway, David Goodwin (4-1)

Mack Stewart was called for goalie interference after colliding with Shane Owen in the Flyers crease, sitting for his first professional penalty minutes at 30:09.

Shane Owen was replaced in the Flyers goal by Paisley native Andrew Little for the final 20 minutes, and there was little he could do to stop Belfast’s fifth. JJ Piccinich squared the puck across the face of goal to a poised Scott Conway at the back door for his second of the night from point blank range at 43:58. (5-1)

Carson Stadnyk pulled one back for the Flyers with just over ten minutes to go when his mid-zone wrist shot beat Whistle high glove side at 49:06. (Assist: Jonas Emmerdahl, Isak Aldergran, 5-2)

It was 56:49 before the first penalty of a lightning quick period was called, as Erik Naslund headed to the box for cross checking. JJ Piccinich added a sixth for Belfast just under a minute later; tucking home from the edge of the crease at 57:47 to underline a dominant Giants victory. (Assist: David Goodwin, Jordan Boucher, 6-2.