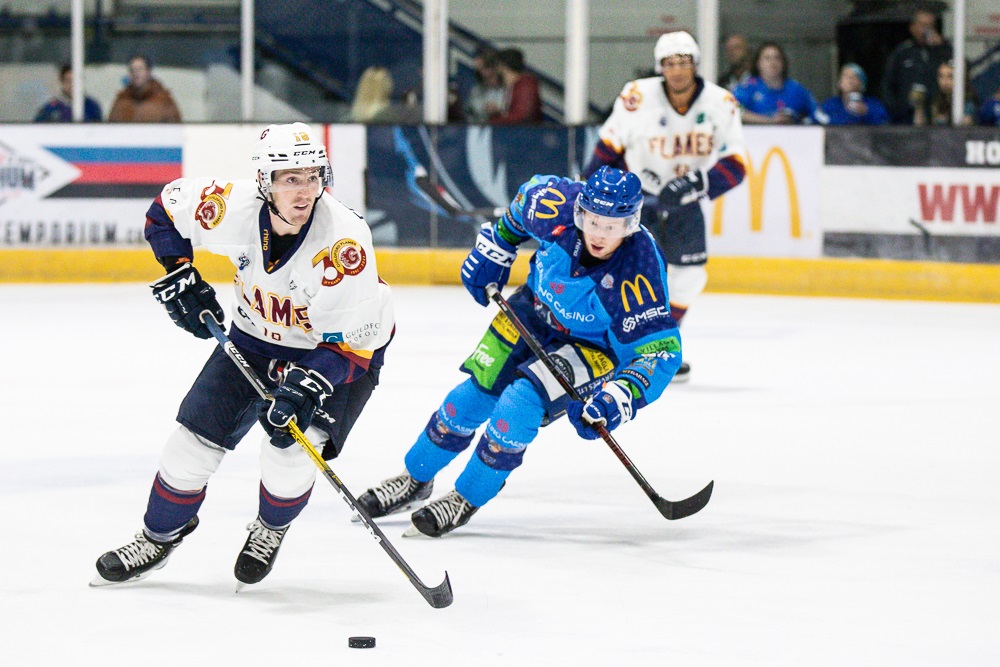 Flames defeat Coventry on the road

Kevin Lindskoug turned aside 27 shots and a pair of goals each by Levi Cable and Ian McNulty followed Robert Lachowicz’s opener as the Flames collected the 2nd Cup win of the weekend with a 5-1 success at Coventry Blaze.

After a 4 goal burst shared between the teams in the opening frame Saturday, the same contestants skated through the first 20 minutes at Coventry 24 hours later without a single marker between them.

That changed at 27:04 when Blaze jumped out front through Evan Bloodoff. Exactly 4 minutes later, during a stretch of 4 on 4 play, Robert Lachowicz netted his Flames starter to level it. Shortly thereafter, Cable ‘s breakaway conversion had the visitors in the lead, and the slim difference carried the clubs through the 2nd set.

Just 56 seconds into the 3rd, and while killing a penalty, Ian McNulty collected a breakaway pass before beating CJ Motte to open a 2 goal spread. They added to it at 45:10 with Cable’s 2nd of the night and McNulty added his 2nd on the powerplay just outside the final 10 minute stretch to close the evening’s offence.

“It’s a great achievement for these guys to have been able to come in and start cold without any pre-season games,” Paul Dixon explained, “with many guys having little to no game action last year, and still play as well as they did and not just win but score goals, which normally is the thing that takes really long to come around after a layoff.”

“We have to remember it is really early, and nothing we did here tells us how things will be down the road, but it certainly is confidence building and let’s us know that we have a team that has potential to grow into what we hope for in the weeks and months to come.”

“We will enjoy this win and a good cup start, and these guys have earned their first day off of the new season and hopefully they get some rest and come back with a spark next week at training to carry on the long journey ahead.”