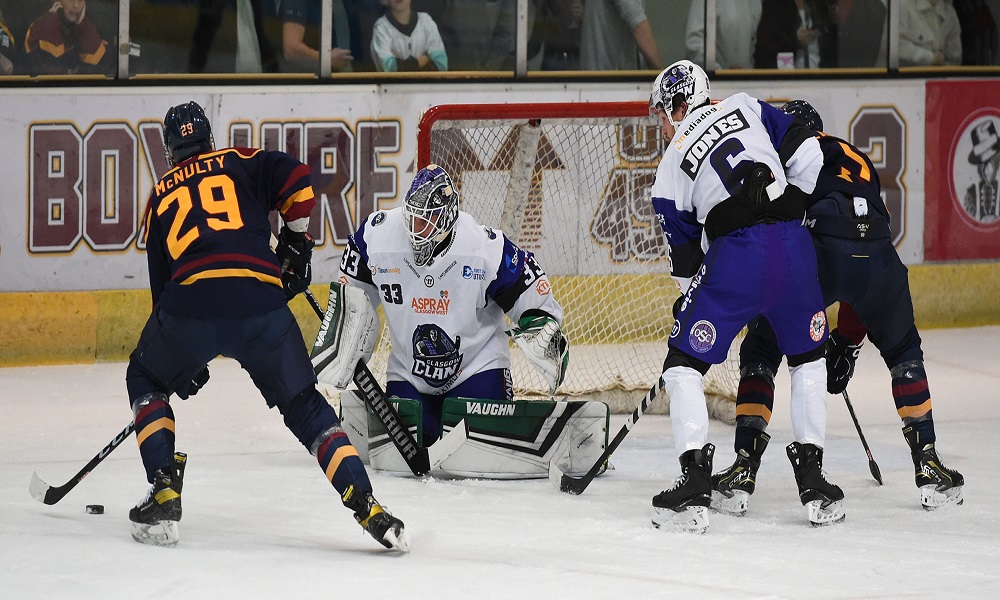 With overtime looming inside the last minute, and the clubs deadlocked on a goal each, Ian McNulty found the winner with 37 seconds to play to lift the Flames to a 2-1 home ice win over Glasgow Clan.

A nearly even shot count in the opening frame was handled perfectly by netminder Eamon McAdam in the Flames net and Zach Driscoll for Clan and the sides went to the 2nd the way the evening’s score began.

Not a lot more scoring in the 2nd but there was a single thanks to a powerplay marker by Sam Marklund at 28:59 that put Flames in a lead they retained into the final frame.

It didn’t t take long for Clan to change that situation, however, as long time former Flames forward John Dunbar knotted the score at a goal each just 64 seconds after re-start, but with time winding down, the decider by McNulty tipped the table points to the Flames side of the ledger.

“That was certainly quite an even game that either side could have won,” said Paul Dixon, “so we are thrilled that we were the team that got the late breakthrough to be able to not only secure the win but keep any points off their side of the board by avoiding overtime.”

“We got a great game in net by Eamon (McAdam), and that gave us the opportunity to be in a position at the end to win.”

“It’s great to pick up both wins this weekend to help us build some early confidence, and hopefully we can use that to our advantage as we go into Manchester on Wednesday night for our first scheduled mid week action.”