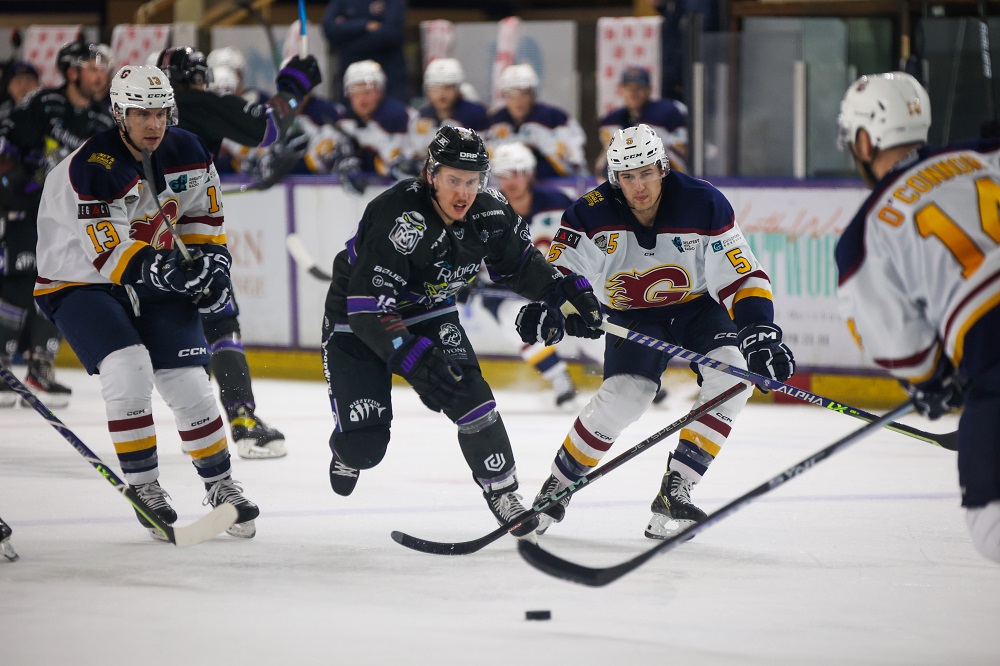 Flames beat the Storm on the road

A quick start by Manchester Storm on home ice, was washed out quickly and thoroughly as Flames replied with 4 unanswered first period goals to take a commanding lead they would not relinquish the rest of the way during a 6-3 road win.

Stephen Johnson slipped the home side into a lead just 41 seconds from puck drop, but Flames replied just over a minute later with an Ian McNulty strike to level. They followed with 3 more before the period was out thanks to Johan Erikssonin the 3rd minute, a shorthanded Ryan Tait marker around the period’s mid point and another McNulty goal late in the frame.

Cole Carter cut Storm’s deficit back to a pair when he was on target at 28:17, but Sam Marklund answered just 34 seconds later to re-store the initial 3 goal spread and Spectrum’s men took a 5-2 lead through the 2nd.

With time winding down in the last set, Ryan Barrow cut Flames lead again, but 80 seconds from time with Storm skating with and extra attacker and an empty cage, Daniel Tedesco iced the traveller’s win.

“It was a tough way to start a game giving up a goal after just a few seconds, but the guys really responded well and it was almost no time before we were in the lead,” said Head Coach Paul Dixon.

“Because of the significantly smaller ice surface in that building, and we don’t build a team for that style of game, it is a place where you just never quite know how things will go on any given night.”

“We are thrilled to be coming home with a win, and now we need to quickly re-group for returning to Cup action this weekend at home to Coventry and then Sunday back in Cardiff.”