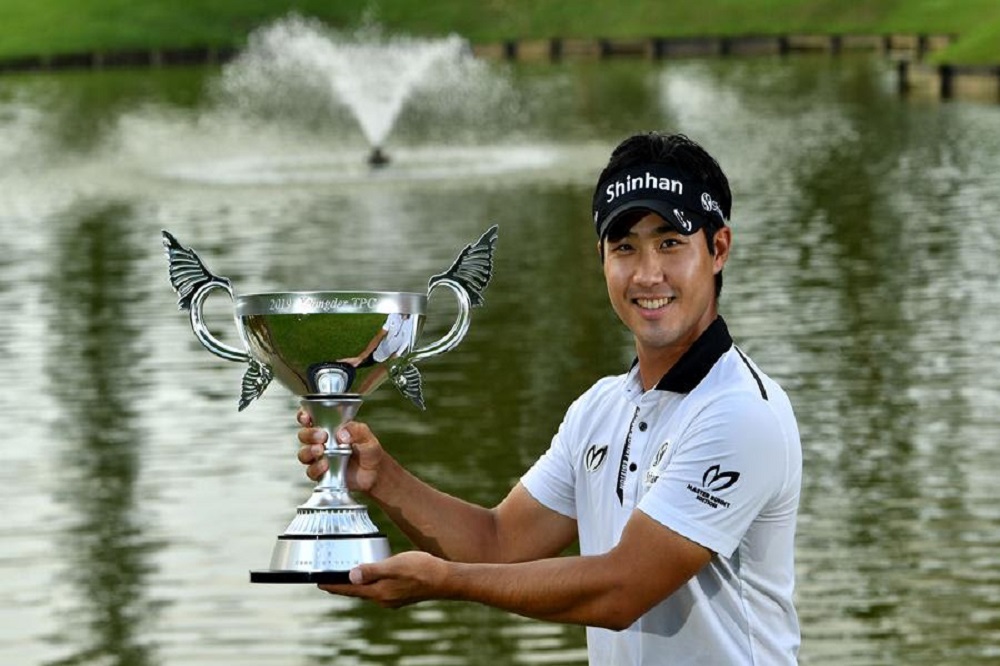 Korea’s Yikeun Chang shook off his bridesmaid’s tag when he closed with a flawless six-under-par 66 to seal a three-shot victory for his maiden Asian Tour title at the US$500,000 Yeangder Tournament Players Championship (TPC) on Sunday.

The 25-year-old Chang, a three-time runner-up on the Asian Tour, overcame a one-shot deficit as he rode a hot putter to return with a bogey-free round highlighted by six birdies at the Linkou International Golf and Country Club.

Chang would take home a winner’s prize purse of US$90,000 following his breakthrough and his winning total of 21-under-par 267 would also mark the record lowest 72-hole score in the tournament’s 10-year history.

Talented Thai rookie Kosuke Hamamoto continued his fine form to sign for a bogey-free 67 and record his best result yet on the Asian Tour with his second-place finish. The 20-year-old Hamamoto has impressively kept the bogeys off his card for the last 52 holes.

Local hotshot Chan Shih-chang was disappointed not to recapture the trophy on home soil after battling to a 70 to finish in third place on 271. The 33-year-old, however, stayed positive as he capped his best result this season after missing six cuts in eight starts prior to this week.

Overnight leader Lin Wen-tang settled a further shot back in fourth following a 72 but took pride in his commendable result, which marked his fourth top-five finish in 10 attempts at the Yeangder TPC.

Yikeun Chang (Kor) – Final round 66 (-6), Total 267 (-21): I knew I had to start off good because the rain softened the course, so I knew I could take it low and I started really nice. I think the birdie on number four was huge because I made like a 20 footer there. From then on, I played really well.

The 16th hole is hard because on that tee shot I knew I had to hit the fairway and I did that, and I hit a lot of good shots today. I putted well, I hit the ball well and I placed it in the right places. I could have made more putts on the back nine but overall, my putting was good.

This is my first Asian Tour win and it means a lot to me. I’ve been on this Tour for four years and I’ve had like three second place finishes already. I just couldn’t get it done, but it feels really nice to get it done now. I’m planning to take a one-week break in Taipei before heading back home. I’m looking forward to it.

Kosuke Hamamoto (Tha) – Final round 67 (-5), Total 270 (-18): To be honest, I was quite nervous going out today because I knew a really good finish could maybe make the rest of the year a lot easier. Because I really want to be in the top-60 for next year. I think I should be safe now, but you know the goal is to keep improving on the Order of Merit ranking and just keep going forward.

I hung in there really well this week, I felt like I played my own game really well, just did my own process really well today. I’m happy. It’s my first time playing this tournament. I didn’t expect anything but I just knew I was in pretty good form coming here and I just wanted to keep it going.

I tried to stay in the present and focus on my process. On the front nine, I hit a couple of good shots and made a long putt on number seven which kind of made the back nine a bit easier. On the back nine, however, I think I ran out of gas a bit. It’s my fourth week in a row but I’m just happy I got it done.

Chan Shih-chang (Tpe) – Final round 70 (-2), Total 271 (-17): I didn’t hit my irons well today. Putting was not great either. I am very disappointed. I wanted to hang on to my two-under on the front but didn’t manage to do that. I didn’t play to my expectations. I think it’s a failed performance.

I might have to play well in a couple more tournaments to keep my card on the Asian Tour this year. I will keep working hard. I will try and play well on the Japan Tour as well. There’s a lot more work to do.

Lin Wen-tang (Tpe) – Final round 72 (even-par), Total 272 (-16): I knew I had to play well on the front nine. It’s important to get off to a good start when you are in the lead. But unfortunately, I got unlucky on the first, hit it into the bunker and made a bogey there. I didn’t read the greens as well as I did the last three rounds, missed a lot of short putts.

Putting was indeed a little disappointing but I did my best. It’s a pity not to have won, having come close so many times in this tournament. But to finish on 16-under total, I am very impressed with myself, especially when I’m not young anymore (laughs).

Richard T. Lee (Can) – Final round 65 (-7), Total 273 (-15): I haven’t birdied the 18th hole until today. So I am pretty happy to finish with a birdie there. To finish five-under on the back-nine is just amazing. Yikeun is making it look easier actually.

Overall, I think this week is a good week, except for yesterday where I shot even but that’s golf for you. I almost holed my third shot on the par-five last, hit the pin actually.

It’s a positive week. I made a lot of birdies out there. I can’t complain at all. I am going to take a week off and then prepare for the next tournament in Korea.

Casey O’Toole (USA) – Final round 67 (-5), Total 273 (-15): It’s probably the best tournament I’ve had since this tournament three years ago, so it’s been awhile. I played good, played solid, drove the ball better this week and I was able to make some putts.

I mean, I felt like the past couple of months my game was coming around, I just needed something to play in. So it was nice to see that today, I just had a lot of good things this week so I’m really pleased with how I played this week, excited.

My short game really got away from me the last couple of years and I’ve been working hard on it. This week it really for once it saved me, it helped me, and that’s the name of the game. I’ve always been able to hit the ball, I’ve never hit it terrible, you know, I’ve always been able to keep it in front of me in play, but just my short game really the last couple of years got away from me.

But i’ve just been working hard, for some reason this week it really started coming around. It was nice, it feels good and it takes some pressure off everything.

Scores after round 4 of the Yeangder Tournament Players Championship being played at the par 72, 7108 Yards Linkou GcC course (am - denotes amateur):