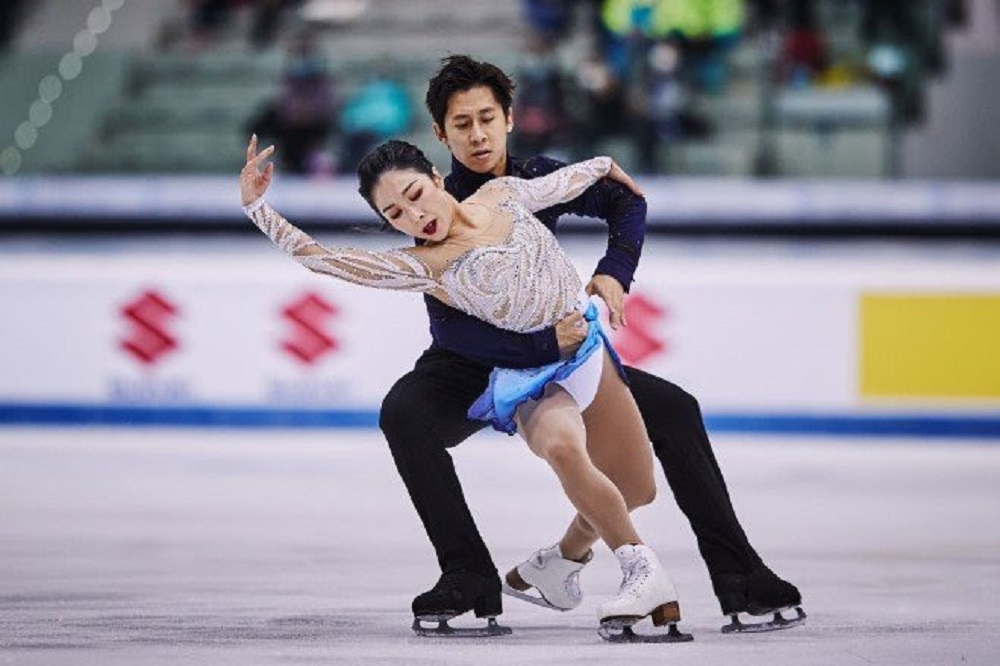 2021 ISU World Champion Anna Shcherbakova of Russia rallied back after the Short Program to take her third ISU Grand Prix gold medal. Maiia Khromykh of Russia claimed the silver medal in her debut at the ISU Grand Prix while Belgium’s Loena Hendrickx earned the bronze, the first ISU Grand Prix medal for a woman from her country.

Performing to “Ruska”, “The Master and Margarita” and “Lacrimosa”, Shcherbakova delivered, hitting a quad flip right out of the gate and following up with seven triple jumps including the triple Lutz-triple loop combination that had eluded her in the Short Program. The 2021 ISU World Champion set a new personal best score in the Free Skating with 165.05 points and totaled 236.78 points overall.

“My main goal for this competition was to show that my quad is back and I reached that goal. I made some mistakes in the short program and I will work on it. The short program has to be clean every time, but am happy and satisfied with my performance today,” the 17-year-old commented.

Khromykh landed a quad toe-double toe, another quad toe and five triples in her routine to “Moulin Rouge”. Her only error came when she stumbled on an underroated triple loop. The ISU World Junior Championships competitor improved her personal best by 20 points with 154.31 points and accumulated 226.35 points.

“I am satisfied, and at the same time I am not. I made an error on the loop and the footwork was not so good. But I am very happy with my second place in my very first (senior) Grand Prix, so yes, Maiia can do it,” the Muscovite said.

Overnight leader Hendrickx turned in another excellent performance to a mix of Oriental music that included six triple jumps and difficult spins. The Belgian Champion achieved a personal best as well with 145.53 points and 219.05 points overall.

“I was very emotional when I saw I became third, it's a dream that came true,” said Hendrickx, who celebrated her 22nd birthday on Friday.

“I worked hard for that and I had to overcome many setbacks. I am very proud to be the first Belgian woman to get a Grand Prix medal,” she added.

Papadakis/Cizeron put out an impressive performance of their dance to “Elegie” by Gabriel Faure? which was highlighted by intricate footwork and beautiful lifts.

The five-time ISU European Champions earned a level four for their lifts, twizzles and the combination spin, while the diagonal step sequence was rated a level three. The multiple ISU Grand Prix Champions set a new season’s best with 132.61 points and accumulated 220.06 points overall for a confident victory.

“We are happy with our performance today, we made some improvements technically since Finland (Finlandia Trophy),” Cizeron said.

“We pushed ourselves during the last weeks. There are still a lot of things to work on for the next Grand Prix and the Final. It's a whole year's process, we go step by step and we improve what needs to be improved,” he continued.

“We are happy with the performance,” added Papadakis. “We improved with the levels on the steps, which was the main goal for this competition.”

Hubbell/Donohue’s dance to “Drowning” by Anne Sila included innovative lifts that were graded a level four, as were the combo spin and the twizzles.

The 2021 ISU World silver medalists picked up 123.11 points and had 207.90 points overall. With a first and a second place in their two events, Hubbell/Donohue qualified for the ISU Grand Prix of Figure Skating Final.

“Zach and I made some improvements since Skate America. We were able to increase our levels on the step sequence and we made some changes musically as well as choreographically,” Hubbell noted.

“It's hard as an athlete to have a solid performance and make a mistake towards the end, which always leaves you with a bitter taste in your mouth,” she added, referring to a wobble on their choreo lift. “We are disappointed with the score today, and with our combo lift getting +2 from some of the judges, so we need to hear the feedback why.”

Dancing to “Romeo and Juliet”, Stepanova/Bukin collected a level four for five elements. The four- time European medalists scored 120.71 points which added up to 202.18 points.

“Today we are not as happy as yesterday with our performance, because we lacked speed and power and hence some emotions were missed. It's a dance that is full of emotions, it's about love, and we were unable to show the whole story today,” Stepanova said.

“We are happy, overall, with skating two clean performances. We'll keep working and our second Grand Prix is in a week (in Grenoble),” she continued.

Shiyue Wang/Xinyu Liu (CHN) moved up to fourth place with their Free Dance to Chinese music (184.59 points) while Caroline Green/Michael Parsons (USA) slipped to fifth after she fell on the
exit from a lift (178.26 points). Evgeniia Lopareva/Geoffry Brissaud (FRA) placed sixth at 174.63.

China’s Wenjing Sui/Cong Han skated off with the gold ahead of teammates Cheng Peng/Yang Jin. Iuliia Artemeva/Mikhail Nazarychev of Russia earned the bronze in their debut at the ISU Grand Prix of Figure Skating.

“It’s a hard month for us with three competitions and we change a lot of time zones. I feel today after the short program my energy and body are not really well, but we did well,” Sui told the press. “We still have some problems we need to fix. I think we can keep working on making the program.”

“This is our first and only Grand Prix. We really treasure the opportunity to be on the ice and a competition we want to thank the audience and this experience means a lot to us,” Peng commented.

Artemeva/Nazarychev’s program to “Fire On Fire” by Sam Smith and “Chronos” by Kirill Richter included a double Axel-Euler-triple Salchow, triple twist and throw triple loop, but she fell on the triple toeloop and stepped out of the throw triple flip. The 2020 ISU World Junior bronze medalists earned 125.11 points and moved up one spot to take bronze at 187.01 points.

“We prepared really hard for this Grand Prix, the practices went well and our skate should have been like the practice, but I guess we lacked some work and we have a second event soon
in France, We'll try to fix all our mistakes and show what we want - the best we can do and beautiful skating,” Naazarychev noted.

Nicole Della Monica/Matteo Guarise (ITA) dropped from third to fourth as they struggled with their solo jumps and she fell on the throw triple loop. (179.26 points). Rebecca Ghilardi/Filippo Ambrosini (ITA) 165.45.

Annika Hocke/Robert Kunkel (GER) withdrew from the Pairs event due to medical reasons. They stood in 8th place following the Short Program.

Sui/Han completed their two Grand Prix events and proceed to the Final with the maximum of 30 points. Peng/Jin have 13 points but will not compete in a second Grand Prix this season. Artiemeva/Nazarychev pocketed 11 points and will compete again in Grenoble.

In what was a turbulent Men’s event, Japan’s Yuma Kagiyama surged from seventh place to win the ISU Grand Prix of Figure Skating Gran Premio d’Italia in Turin Saturday. Mikhail Kolyada of Russia pulled up from fourth to second and Italian Daniel Grassl claimed the bronze, his first ISU Grand Prix medal at the senior level.

Kagiyama stood in seventh place following a faulty Short Program, but came back strong in the Free Skating to “Gladiator”, fighting his way up to gold.

“Of course, I just found out that I finished in first place, so I'm very surprised,” Kagiyama said. “Coming into the long program, I didn't even think about being on the podium or getting a good score, I was just planning to do my best.

“After the short program I couldn't change my mindset and even this morning I was feeling low in practice. I didn't know what to do about the situation,” he said.

“My coach said let's forget what we did last year - the position, the record - so I shook it off and thought I'm starting from scratch and I'm doing my best and it helped. It's a good experience for me,” he continued.

Skating to “Schindler’s List”, Kolyada landed a quad toe-triple toe, two triple Axels and a triple Lutz- Euler-triple Salchow, but stepped out of the quad Salchow and second quad toe.

The Russian Champion set a personal best with 181.25 points and scored 273.55 points to earn his first silver medal on the ISU Grand Prix after a bronze and two gold medals.

“The performance was not ideal, but Alexei Nikolaevich (Mishin, coach) said that we are moving into the right direction and I believe him,” Kolyada noted. “I am taking step by step. It is a shame about the mistakes, but I liked the emotional part of my performance.”

“The emotions were high and I wanted to give a good skate for the Italians,” said Grassl. “And I'm happy I did my first podium in Italy and that the Grand Prix was here, so thank you to all the people who supported me. It was amazing performing here.”

Deniss Vasiljevs (LAT) moved up one spot to fourth at 248.44 points while Junhwan Cha (KOR) dropped from third to fifth after some errors (247.74 points). Kazuki Tomono (JPN) came sixth (245.11). Overnight leader Boyang Jin (CHN) faded to seventh after falling on two jumps and other mistakes.

Paul Fentz (GER) withdrew from the event citing injury. He had stood in 11th place following the Short Program.