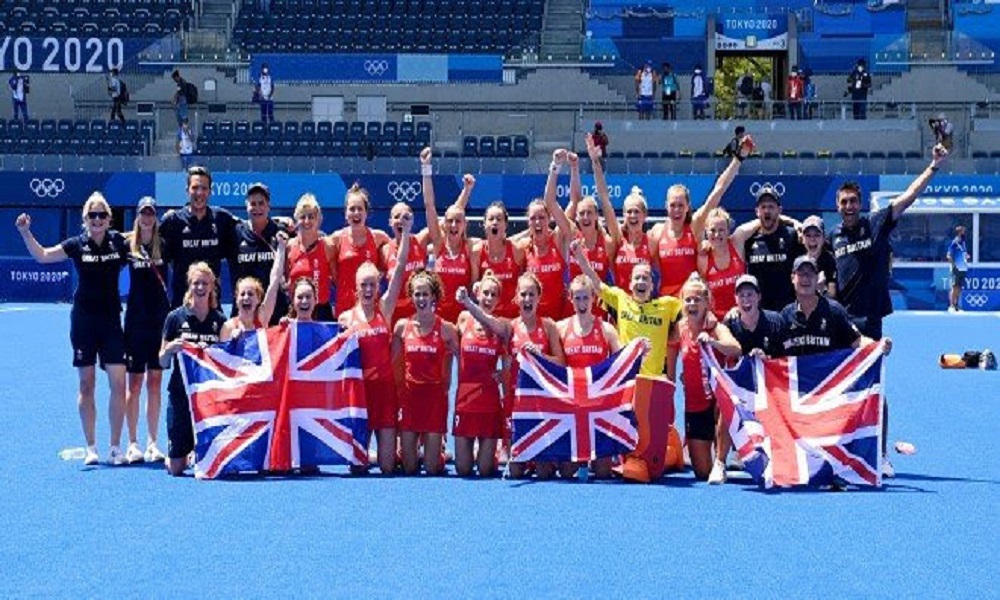 Great Britain’s women clinched bronze at the Tokyo Olympics with a thrilling 4-3 victory over India.

Five goals inside a frantic second quarter saw GB go from 2-0 up, thanks to goals from Ellie Rayer and Sarah Robertson, to being 3-2 down at half-time after India rallied.

In what had been a gripping game throughout, Grace Balsdon’s brilliant drag flick at the start of the final quarter would prove to be the difference as GB took a well-earned bronze medal at the Tokyo Olympics.

The result marks the first time ever GB’s men or women have recorded three successive medals at the Olympic Games.

Giselle Ansley came close from a penalty corner only to find Savita in the India goal there to block the attempt.

Savita was on hand again to deny the best chance of the first quarter. Rayer had a shot from close range superbly saved by an outstretched foot before the ‘keeper showed quick reflexes to reposition and save Sarah Jones’ follow up attempt.

The game really roared into life in the second quarter as five goals were plundered in. Rayer flew down the by-line and flashed the ball across the face of goal only to see it knocked into the goal by an Indian player to open the scores.

A fast-flowing team move saw GB double the lead. Shona McCallin played a perfectly weighted final ball into Robertson who rifled the ball in off the post with a sublime finish on the reverse.

India wouldn’t take it lying down and immediately struck back. Two goals in two minutes, both from Gurjit Kaur, saw India tie things up through a brilliant brace of drag flicks.

The team didn’t stop there and took the lead just one minute from half-time. A scramble inside the circle saw the ball fall kindly to Katariya who slotted home from close range to make it three Indian goals in four minutes and stun GB.

GB came back strongly after the interval and within five minutes were level. Sarah Jones did superbly to create the initial chance with a purposeful run into the circle, the ball falling to the edge of the circle to Pearne-Webb who lashes it into the far corner.

India looked to make an immediate response and came close to restoring their lead. Two penalty corners in quick succession ramped up the pressure, but Hinch was again on hand to thwart the effort.

In an end-to-end fifteen-minute spell, GB enjoyed a flurry of chances of their own in a goal-mouth scramble before India came close from a penalty corner in the final minute of the quarter.

Great Britain restored the lead early in the final quarter thanks to Grace Balsdon’s thumping drag flick which would prove to be a decisive goal. Though there would be nervy moments, GB took the pace out of the match and worked hard to grind out the victory and secure the bronze medal.

This is the third consecutive Olympic medal earned by GB’s women following bronze at London 2012 and gold at Rio 2016. Laura Unsworth, who was part of all three teams, becomes the most successful British hockey player of all time – only eight British women have women more Olympic medals than her.

fter the match, Hollie Pearne-Webb commented: "I’m incredibly proud of the squad. To the 16 who played and will get a medal, but also the three reserves who deserve a medal, plus the players at home not selected. We have 26 in the squad but so many more not selected. We've had a lot of turnover in the last five years, I wish they could all get a medal because they deserve one. That's why we're here and how we've achieved it.

"It's been a tough five years, at times we doubted whether we could do it, but we have.

"It's so hard to sum it up. We've not had many highs in this cycle, and after winning in Rio, that's the biggest challenge. To bring a group all together after so many challenges, I can't even remember them all! We've sacrificed so much to perform as best we could. A few months ago, an Olympic bronze was just a dream but I'm so proud we've done it.

“There’s been so many challenges, I can’t recall them all. Not just collectively as a team but individually as well. It’s been tough for everyone back home in the last 18 months and that’s been the same for us. Some of the girls, myself included, haven’t seen our families for over a year. We’ve been locked down, Christmas on our own, and we did that because we wanted to come here and give the best performances we could.

“An Olympic bronze a few months ago was in our wildest dreams so I’m just so proud of the whole squad, the whole support staff, everyone that’s been involved that we can come away with something from here.

"At half time it was just a big deep breath. Go back to our game and believe in ourselves. We came out in the second half really well."