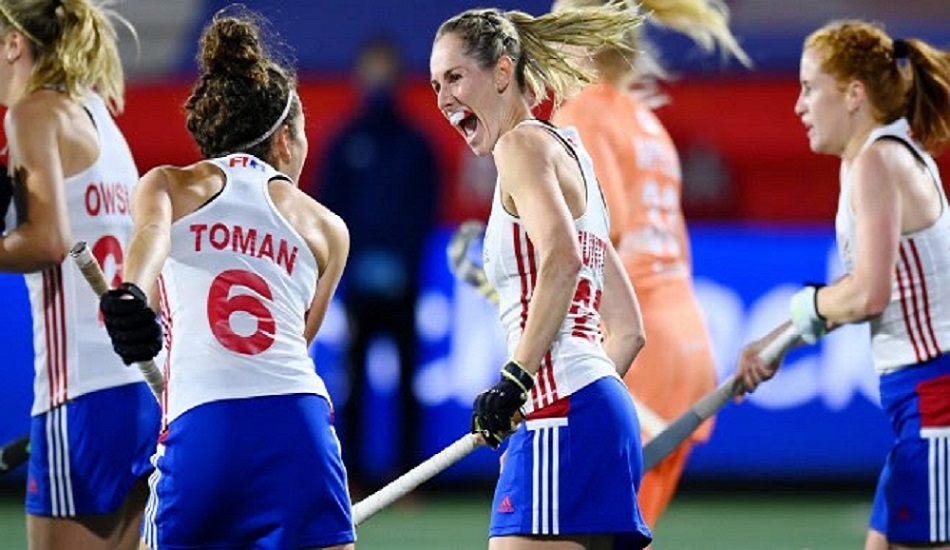 Great Britain’s women and men were back in FIH Hockey Pro League action with a compelling double header against The Netherlands.

Jo Hunter bagged her first Great Britain goal in what was an accomplished team performance as GB’s women recorded a closely fought 1-1 draw against the reigning world number one side.

Despite seeing the Dutch take the bonus point via a penalty shootout, Mark Hager's side can take plenty of positives from a spirited showing in their first international match since February.

Both Fiona Crackles and Sophie Hamilton made their international debuts in a pulsating spectacle in Amsterdam.

Great Britain's men fell to a narrow 1-0 defeat in a hotly contested second match of the day.

Ollie Payne impressed with several saves in his international debut in a spirited showing from Danny Kerry's team. It was also a special occasion for Harry Martin as he played his 100th game for Great Britain.

The Netherlands were lightning fast out of the blocks, quickly countering from a GB attack and finding the back of the net through Pien Dicke, for what was her first international goal, with just two minutes on the clock.

Though GB found themselves at an early deficit, the team responded well and enjoyed the majority of possession in the opposition’s half for the remainder of the opening quarter.

The hosts further demonstrated their attacking capabilities in the following quarter with their initial strike going narrowly wide before Dicke’s deflection also came close to doubling their advantage shortly after.

Good work on the wing from Robertson earned the first penalty corner of the match, though Grace Balsdon’s effort was quickly charged down as the Dutch carried their lead into the half-time break.

Sabbie Heesh showed quick reflexes to parry the goal bound ball mid-way through the third-quarter as the Dutch ramped up the pressure.

With the hosts down to 10 after being shown a green card, GB enjoyed a bright spell of possession with two penalty corners, the second of which drawing a magnificent save to deny Anna Toman’s slap from finding the backboard.

Still holding the numerical advantage, Great Britain found a breakthrough as Hunter reacted fastest to poke in GB’s first goal against the Dutch since the Rio 2016 Olympic final and restore parity with just over 15 minutes remaining.

GB continued on the offensive and a superb weaving run from Lily Owsley earned a fourth penalty corner with just under 10 minutes remaining, the Dutch defence standing firm to prevent a second goal.

Neither side could record a decisive blow in the final-quarter, with the Dutch taking the bonus point with a 3-1 penalty shootout victory.

After the game, Hager commented: “We’re pleased to be playing again after seven months away from the game.

“It was a well-disciplined performance where we were better defensively, which is an area we’ve been focussing on during lockdown.”

The teams will face each other once again on Thursday at 15:30