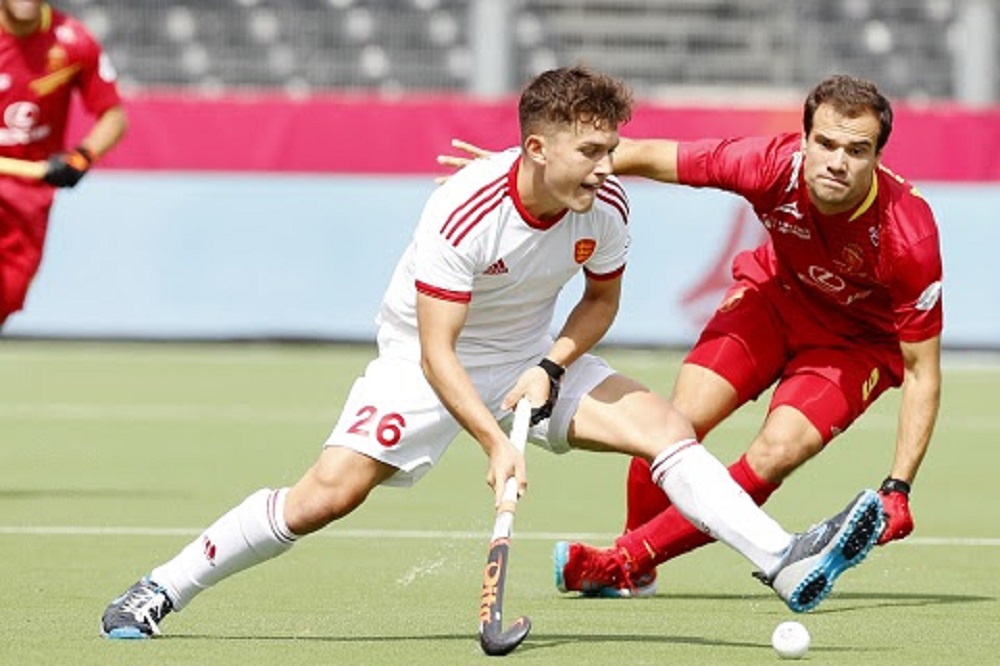 
England’s men’s team failed to advance to the semi-finals of the EuroHockey Championships after drawing 2-2 with Spain in an action packed match.

Sam Ward gave England the advantage with a nice chipped finish, however two goals in the third quarter for Spain, courtesy of Pau Quemada and Diego Arana, put England on the brink.

Though Ashley Jackson’s stunning drag flick gave England hope with less than ten minutes remaining, resilient defending from Spain ensured they would progress to the semi-finals.

Danny Kerry commented: “It was an absorbing game given the stakes. I felt the team controlled the game well apart from a critical five-minute spell after half-time which included a green card. I was pleased to see how we responded to going behind and how we brought the game back level.

“Some good lessons on being a bit calmer in breaking down the deep Spanish defence when we had the extra player will be learned. We will now take the day to get over our disappointment and then regroup for the upcoming games.”

England started well and conjured a good chance within the first two minutes as Roper’s jinking run on the right wing lead to a good ball to Chris Griffiths whose shot was well saved by the outstretched leg of Quico Cortes in goal.

It was a quiet opening quarter with both sides keen to avoid suffering an early setback, the only other notable chance falling to Will Calnan who was picked out beautifully by a David Ames aerial, however his shot on the half-volley flew wide of the target.

Harry Gibson was called into action at the very start of the second-quarter with a superb save and follow up clearance to quell the danger.

England replied with an attacking move of their own, Zach Wallace putting the ball into the danger area where Ward dinked the ball over the prone Cortes to take a 1-0 lead.

A closely battled, cagey opening half ensued where, given the importance of a positive result, both sides looked to maintain possession and limit the chances of their opposition.

Though England took a slender lead into half-time, it was quickly erased as Quemada squeezed the ball in at the near post from close range after Gibson’s earlier save fell back at the Spanish forward’s feet for another attempt on goal.

Similarly to the first-half, chances were coming at a premium with another evenly battled quarter of hockey being played out.

The third quarter proved pivotal for Spain as they scored their second in the 15 minute window as Diego Arana tapped a high ball into the back of the net.

It could have been more but Xavi Lleonart struck the crossbar with his penalty stroke just a minute later.

A frantic final 15 minutes followed as England pressed on looking to overturn the deficit.

Shortly after, Ward had a scorching drag flick stopped on the line by some good defending. However, Jackson wasn’t to be denied just after as his rasping flick sailed into the top corner to level the scores and give England little over 8 minutes to find a winner.

With the ‘keeper withdrawn, the team were advancing into the Spanish D looking to get the decisive goal to see them into the semi-finals, however last ditch challenges were keeping England out.

Though England fought hard, it wasn’t to be enough as Spain held on for a draw. England will now play on Thursday and Saturday in Pool C in the battle for 5th place with the times yet to be confirmed.