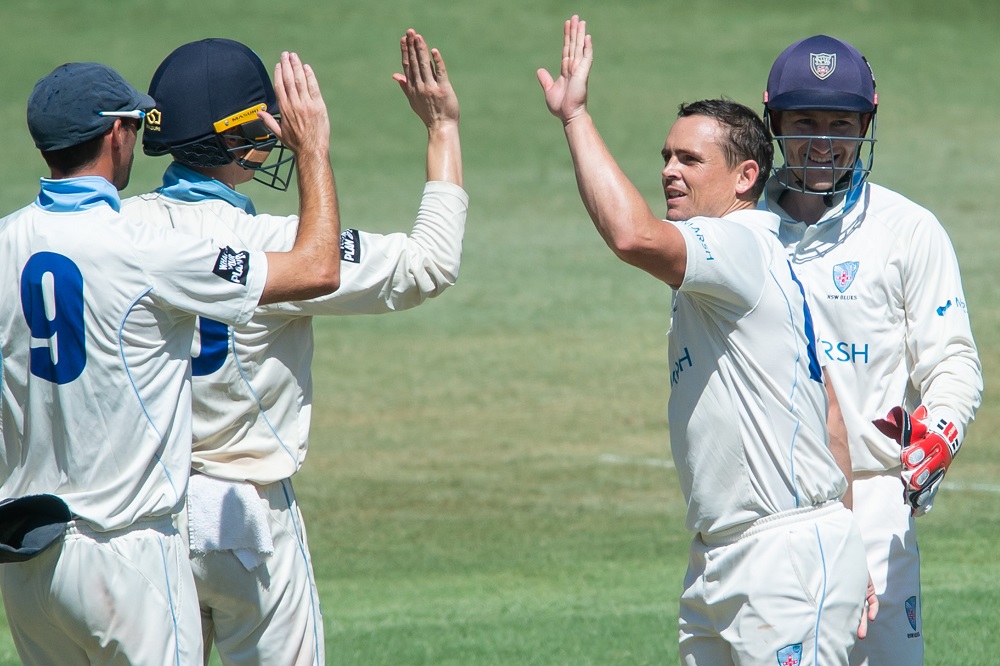 Cricket NSW has paid tribute to long-serving spinner Steve O’Keefe, who will not continue with the Blues next season.

The 35-year-old will however play on for the Sydney Sixers and his Premier Club Manly-Warringah.

Cricket NSW CEO Lee Germon praised O’Keefe for his achievements over a 15-year career with the Blues.

“Steve has been a committed and consistent performer for the Blues over a long period of time,” Mr Germon said.

“He is one of the most successful spinners ever to play for NSW, which earned him Australian selection and the captaincy of the Blues.

“On behalf of Cricket NSW I’d like to thank Steve for his great service to NSW and Australian cricket and look forward to him continuing his career with Manly and the Sixers.”

O’Keefe said he was not offered another contract with the Blues but was grateful for the many opportunities that Cricket NSW had given him over such a long career.

“I was disappointed when I was told that I wasn’t getting a contract but I respect and accept the decision, so I have decided to retire from first class cricket,” O’Keefe said.

“I will forever be grateful to Lee and all the staff, from the front office to the warehouse to the development officers in regional areas, who have all shared the same passion for the game.

"They’ve played a huge role in making the last 15 years so memorable. And of course I am indebted to the fans, who supported my left arm inswingers against their better judgement.

“On a personal level, I want to thank my family, as well as my manager and friend, Andrew Fraser. They’ve been by my side through everything and I couldn’t have done this without them.

“It’s been such a privilege to play for my country and captain my state, but above everything else I’m most proud to have played alongside some of the best blokes I’ve ever met.

“When I think about my time playing cricket, that’s what I’ll miss most.”

His 6-35 in each innings were the best figures taken by a visiting spinner during a Test in India.

He claimed 35 Test wickets at an average of 29.4 and also appeared in seven T20 Internationals for Australia collecting six wickets.

O’Keefe’s First Class record included 13 five-wicket hauls and a best return of 8-77 for the Blues at Junction Oval in Melbourne during March 2018.

The veteran spinner played five matches for the Blues during their 47th Sheffield Shield title last season, which was awarded to NSW after nine rounds due to the coronavirus health crisis.

His 300th First Class scalp came in February at the SCG against Victoria.

He made his Test debut in October 2014 against Pakistan in Dubai and played his final Test in Bangladesh during September 2017.

O’Keefe made his Shield debut in November 2005, then known as the Pura Milk Cup. He finished his career with 224 First Class and Sheffield Shield wickets for NSW, at an average of 25.

Of the 19 spinners to take 200 or more Shield wickets, O’Keefe has the best bowling average since South Australian spinner Ashley Mallett retired in 1981.

O’Keefe is also fifth on the list of most successful Shield spinners for NSW behind Greg Matthews, Stuart MacGill, Richie Benaud and Johnny Martin.

Along with Murray Bennett, O’Keefe is one of only two left arm finger spinners to take more than 100 Sheffield Shield wickets for NSW.

He also scored 2,356 First Class runs overall at 25.6, showing his value with the bat down the order.

O’Keefe’s highest First Class score was 99, coming to the crease at No. 9, against Tasmania in Hobart during February 2015. It was one of 12 half-centuries for him at the First Class level.

He also claimed 30 List A One-Day wickets from 53 matches.