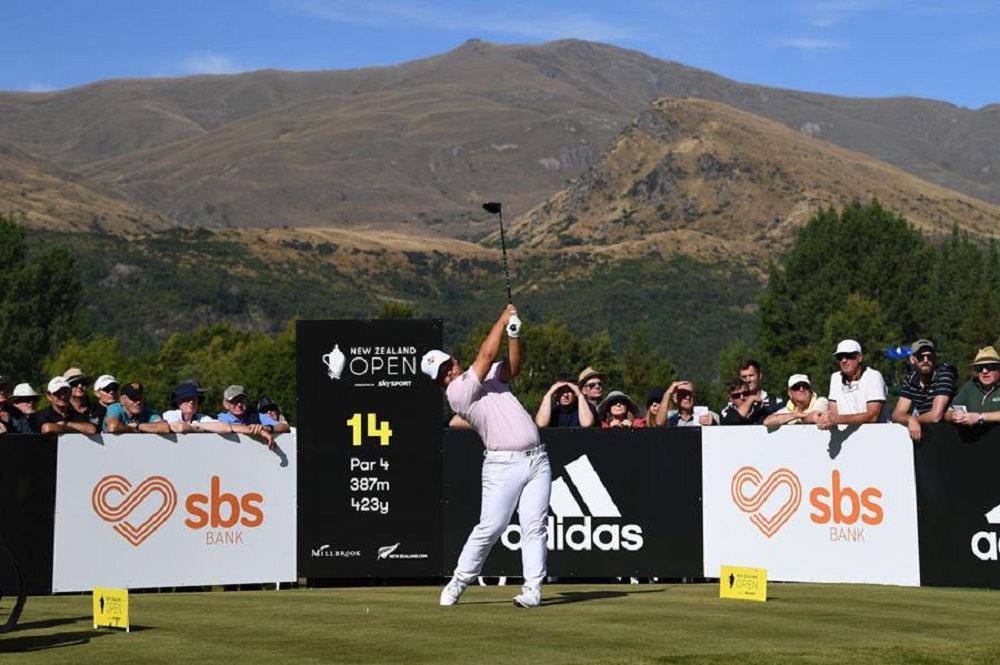 Honours split between Kim and Herbert

Korean teenager Joohyung Kim had a crucial birdie to thank as he closed with a four-under-par 67 to head into the final round with a share of the lead with Australia’s Lucas Herbert at the 101st New Zealand Open presented by Sky Sport on Saturday.

Kim looked in danger of relinquishing his lead for the first time this week but calmly sank his putt from 10 feet on the par-three 18th to sign for a three-day total of 15-under-par 199 at the Millbrook Resort.

Herbert made one of the biggest moves of the day, having trailed Kim by six shots when he stepped up to the opening tee.

The 24-year-old, who won the Dubai Desert Classic on the European Tour last month, stormed to the top of the leaderboard with three birdies in his final five holes.

2011 New Zealand Open champion Brad Kennedy of Australia closed strongly with back-to-back birdies to trail the pair by two shots in outright third place while American Chan Kim, a former member of the Asian Tour who topped the class at the Asian Tour Qualifying School in 2013, is tied for fourth with Australia’s Nick Flanagan on 202 total.

Thailand’s Pavit Tangkamolprasert signed for a 70 to stay five shots back of the leaders in tied-ninth place with Australia’s Ben Eccles and Kieran Muir.

Like his second Asian Tour win in Sabah last year, the 30-year-old Thai is ready to mount a late fight back, having been in similar situations before where he knows that all is not lost yet.

Players’ Quotes: Joohyung Kim (KOR) Third round 67 (-4) Total 199 (-15)
I played really well today. I was playing well off the tee and approach to the greens, but I did leave a lot of shots out there on the greens to be honest. But you can’t have all days when it goes your way, I’m still in the hunt as I gave myself a really good chance for tomorrow. Tomorrow is going to be fun to be honest, playing with Lucas is going to be really enjoyable. Obviously he’s a European Tour winner, so it’s going to be wherever it goes, whether I win or lose tomorrow, I’m just going to really enjoy myself.

Lucas Herbert (AUS) Third round 65 (-6) Total 199 (-15): I was pretty happy with it. I started off quite nicely and got that little three-birdie run through the middle and got myself in a nice position but then straight after that I felt like I really battled my golf swing for a few holes and hit some errant ones. To fight back like I did and make some really good swings sort of 15, 16, 17 and even 18 there to hit it in the middle of the green, I was really proud of that because I think we’ve got a bit of work to do on the range to get ready for tomorrow.

Chan Kim (USA) Third round 65 (-6) Total 202 (-12): I knew that the conditions were going to be very calm today, with not so much wind, so I knew I had to post something low to get close. I played about as good as I could play and left a few out there, but you just can’t complain, it’s six-under and up at the top of the leaderboard, it’s a pretty good feeling. I’ve been playing pretty well and I had a good offseason with my coach. I’m definitely really looking forward to tomorrow and seeing what I can do. Fortunately I played in the morning yesterday when the wind wasn’t as bad, but the first day when we had a lot of wind and some rain, it played really tough and some of those pins you just couldn’t get at. A day like today, it made it easier to fire at pins and give yourself birdie chances. From the looks of it I’m going to have to go pretty low tomorrow, especially if the weather stays like this, so I will be playing fairly aggressive. I just hope that the putts drop and we’ll see how it goes.

Pavit Tangkamolprasert (THA) Third round 70 (-1) Total 204 (-10): I didn’t drive the ball very well today, I couldn’t find the fairways and it was difficult for me to hit from the rough. Especially with the pin positions, playing in the afternoon with firm greens. Overall, I’m very happy with the good start on the front nine, three-under-par, so I can still go low tomorrow. I had a good chance after the front nine today, my putting is still very good, but on the back nine I’m disappointed that I can’t find the fairways. So it puts me in a very difficult spot for tomorrow, but who knows.