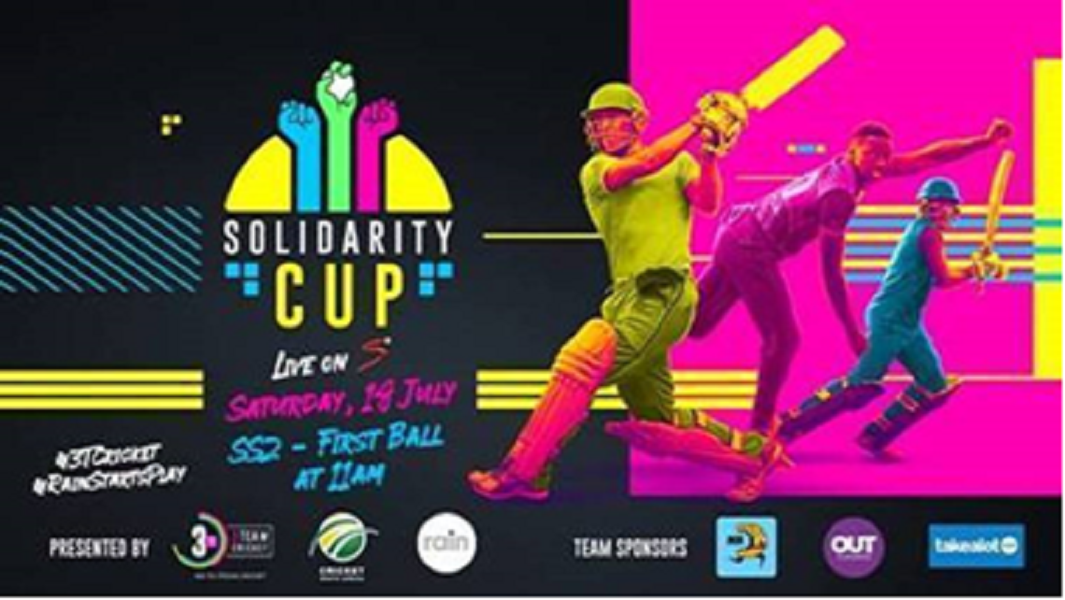 3TeamCricket announced its arrival as the sport’s newest format through the Solidarity Cup, presented by Rain, this past weekend in Centurion. The match which took place on Nelson Mandela International Day is just the beginning.

The organisers have hailed the new innovation – one that saw three teams participate in the same match for the first time – as one for the future but more importantly, were pleased with the outcome of the inaugural fixture for more than one reason.

This came after a total of R3-million was raised for charity. A sum of R500 000 is to be donated to three charities, nominated by the participating captains.

The three charities are the Kolisi Foundation, who receive R250,000 from the AB de Villiers-led Takealot Eagles, who won the title. The Temba Bavuma Foundation receive R150,000 from the Mr D Food Kites, headed by the batsman himself after the late withdrawal of Quinton de Kock, while the Imibala Trust will receive R100,000 donation from the OUTsurance Kingfishers, initially meant to be captained by Kagiso Rabada but replaced by Reeza Hendricks due to a family bereavement.

The balance of R2,5 million is to be given to the Hardship Fund, a joint Cricket South Africa (CSA) and SACA project aimed at providing relief to those within the cricket industry affected by the current COVID-19 pandemic.

“I am really humbled by what transpired and would like to thank our great sponsors for making it possible,” Francois Pienaar, Chief Executive Officer of 3TeamCricket, said. “I can’t recall any SA sporting code that has done this!

“There has been fabulous feedback and yes we have plans to grow 3TC globally.”

The match at SuperSport Park marked a return to live sport in South Africa for the first time since March when the Coronavirus prompted a nationwide lockdown.

“We were hungry for live sport to resume in SA, so being part of the first live sporting event after such a long time was a bit of history that I will enjoy with a smile in my rocking chair one day,” the Springbok legend stated. “It was started by Paul Harris and many people, too many to mention, who worked tirelessly to put the game together. A big thank you to CSA and the 3TC board.”

While many people wondered about the format before the start of play, it became much clearer as the game progressed.

“We will debate this at 3TC headquarters and improve where necessary. The actual match went very well with some great performances. I would have liked a tighter finish, but AB's Eagles were just too good on the day.

“Losing two captains just before the game was disappointing but totally understood in these difficult times. Overall I am very pleased.”

With the future of South African sport still clouded with uncertainty, the 1995 Rugby World Cup-winning captain hoped that COVID-19 will soon leave us and allow for life to return to normal.

“We are living in such uncertain times mainly because of the pandemic, my hope and prayers are for wisdom amongst our leaders across all sectors of society to steer us through these difficult times,” Pienaar added.

“We must build a better future for all united against racism, gender-based violence, murder and corruption. We can be an example to the world.”