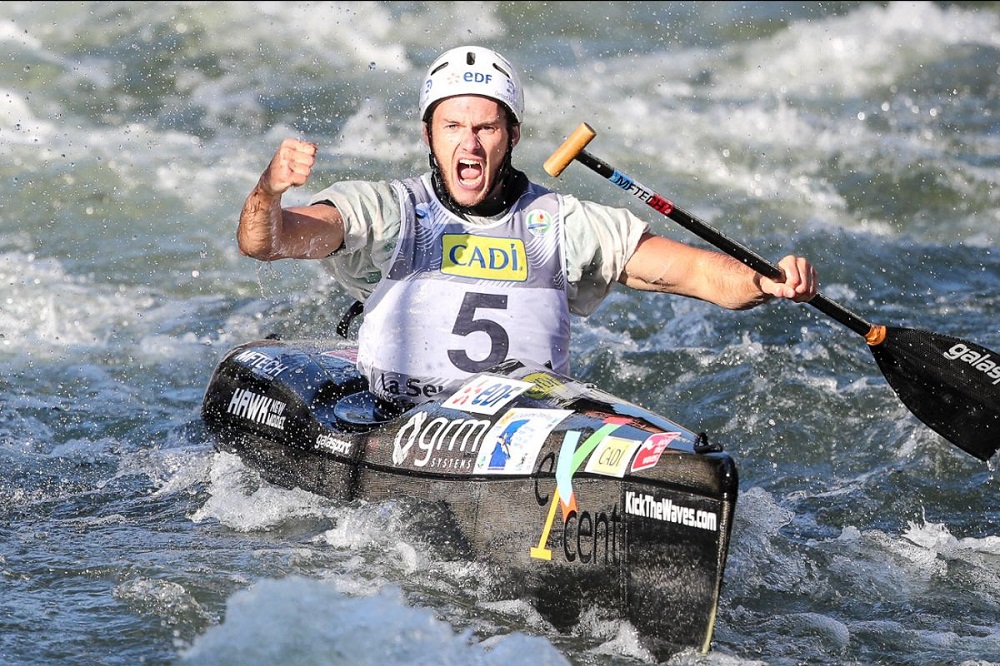 The French had a day out, picking up the women’s kayak, men’s canoe and men’s and women’s C2 world titles, while the Czech Republic’s Martina Satkova won the women’s canoe title.

France’s Louis Lapointe picked up double gold, winning the men’s C1 and teaming up with Tony Debray to take the men’s C2 title.

“Today I did a perfect run, and I’m proud to have done a run like this in the final where there is a lot of pressure,” Lapointe said after his C1 win.

Czech Ondrej Rolenc, looking for a fourth C1 world title, was 0.44 seconds behind, while fellow Czech Vladimir Slanina was third.

It was a similar margin in the men’s C2, where Lapointe and Debray finished 0.41 seconds ahead of Czech’s Marek Rygel and Petr Vesely, with France’s Stephane Santamaria and Quentin Dazeur third.

“My first run in the C1 was not my best, so after the run I spoke with Louis because he had won the gold,” Debray said.

“He had been good on this course, so we spoke about that, and we found a good line, which was very important. Being together in a C2 is very different to being in a C1.”

Nejc Znidarcic added to his already stellar men’s K1 career with another world title, his fourth, but taking the gold with just 0.01 of a second to spare.

“I won the Europeans and the world cups, and for sure this was the goal to win once again here. I made it, but just barely.

“I think I’ve won everything that’s possible, but I find motivation in my teammates because they are all world champions and European champions. If it weren’t for them I don’t think I would be so fast.”

One of the happiest winners on Saturday was France’s Phenicia Dupras, who won her first ever women’s K1 final. She beat the Czech pairing of Anezka Paloudova and Barbora Dimovova.

“I’ve been waiting for this for maybe three years,” Dupras said.

“In Pau in 2017 I was really focused and hoping for a good result, but it didn’t come. So I’ve been searching for this medal.

“I wasn’t worried about the others, I was focusing on myself. I knew I could do a good run with great speed. It’s been a lot of work, and to share this with all the French paddling community is very special.”

Martina Satkova was one of the favourites for the women’s K1, but ran into trouble during her run and eventually finished 14th. But the Czech paddler bounced back less than one hour later to take the women’s C1 gold.

“I think it has been four years since I was world champion, I’m so happy to be back.

“After the K1 I just tried to avoid people saying they felt sorry for me, and concentrated on cheering on the Czech team. I just told myself it was my last run for the day so I needed to do my best, and I did it.
“All the work I did, I’m so happy I did it, and I will continue to do it.”

Gaubert did not have to wait long though to taste success, teaming up with Margot Beziat to win the women’s C2.

“This is our first time of being world champions and we have won it together,” Gaubert said.

“We have a lot of emotion, but we are friends and we think that helps us,” Beziat said.