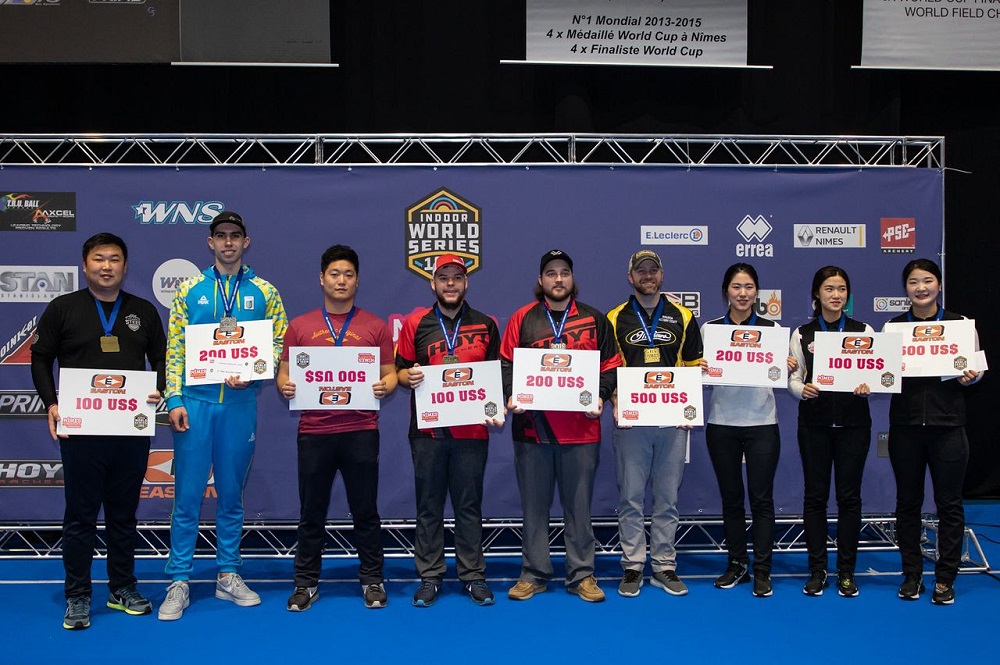 The Indoor World Series inaugural season stopped in Luxembourg, China, Italy, France and USA for five stages and a grand finale.
Sim Yeji, Steve Wijler, Viktoria Balzhanova and Kris Schaff won the individual titles at the 2019 Indoor Archery World Series Finals, held on Saturday 10 February 2019 in the evening after the second day of The Vegas Shoot, fifth and final stage of the season's indoor circuit.

Fourteen-year-old Casey Kaufhold converted her cadet world record - her 589 out of a possible 600 points beat the previous mark, set by Italy’s Tatiana Andreoli in early 2016, by a point - and top-seeded qualifying round into the recurve women’s individual title.

Domagoj Buden won the compound men’s competition, while the world’s number two-ranked recurve man, Steve Wijler, and Toja Ellison were the other two winners at the GT Open.

It was the first international indoor tournament to take place in China.

Ryoo Su Jung of the Korean professional team Hyundai Department Store set a new recurve women’s world record for the 60-arrow 18-metre ranking round, shooting 595 out of a possible 600 points. It beat the previous record of 594, shot by Park Sehui in Nimes in 2016, by one.

Faith Miller scored 594 out of a possible 600 points for the 60-arrow 18-metre ranking round to beat the compound junior women’s world record by a point in Rome. The previous record of 593 points had stood for 12 years after being set by Erika Jones in 2006.

NIMES TOURNAMENT 1000
Nimes in France, the fourth event of this inaugural Indoor World Series, came after the New Year, offering 1000 points to stage winners, before the annual traditional grand finale to the indoor season in Las Vegas.

Janine Meissner, Braden Gellenthien, Kang Chae Young and Lee Seungyun took the individual titles. Meissner shot the best final of the event, scoring 149-points for the 15-arrow 18-metre match in a win over So Chaewon.

Alberto Simonelli’s qualification at the 2019 Nimes Archery Tournament was ratified as a new para archery world record after he shot 594 out of a possible 600 points for the 60-arrow 18-metre ranking round. He had held the record at 590 points since February 2018.

A world record was shot at all four stages of the 2019 Indoor Archery World Series at that stage.

VEGAS SHOOT 1000
The inaugural Indoor Archery World Series finished on 8-10 February in Las Vegas. Celebrating its 53rd year, the Vegas Shoot set yet another record for attendance in 2019 by attracting over 3750 registrations for the first time in its history.

The end of the second day at the Vegas Shoot marked the end of the fifth stage of the Indoor Archery World Series.

Archers in the top 16 of the series’ elite ranking after the stage, who have also attended at least three of the tour’s events, were invited to compete in the Indoor Archery World Series Finals that took place during the evening in Vegas.

“It is amazing. My shooting lately has been a bit rough and it’s great to be back on the podium again,” said Steve Wijler, who came back from a 3-1 deficit to defeat Brady Ellison in a shoot-off for the recurve men’s title.

The recurve women’s final was the most impressive of all the gold medal matches. Both Sim Yeji and Kang Chae Young dropped their third arrows into the nine – and those were the only shots out of the 10 in the regulation five sets.

Schaff added the indoor circuit crown to the Hyundai Archery World Cup Champion title he won in Samsun at the end of 2018.